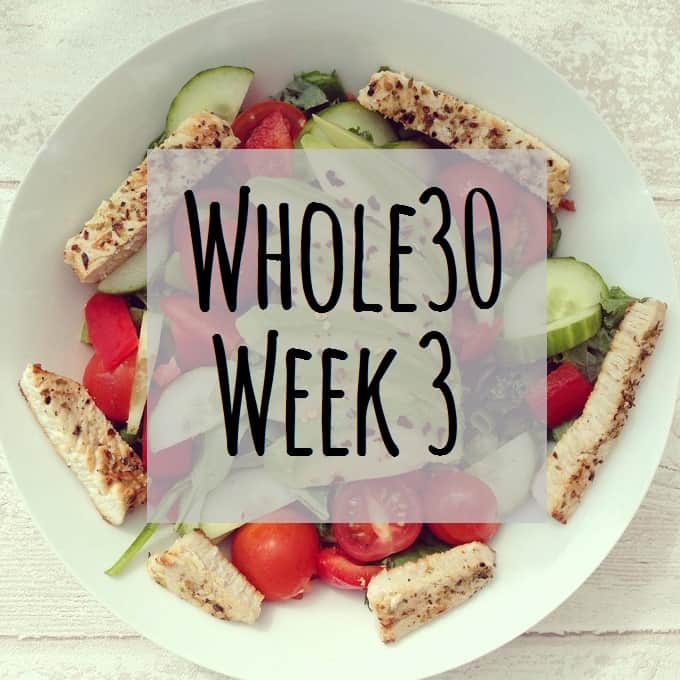 So it’s the end of my third week on the Whole30 programme but unfortunately I’m not feeling as positive as I was last week (my Whole30 Week 2 post). Those cravings that I said were pretty much non-existent have come back to taunt me for being so smug and after a pretty tough week I fell spectacularly off the no-alcohol wagon on Friday night. Let me explain…

My week got off to a bad start when the baby decided to launch himself out the back door in his walker, down a step and landed on his head. I immediately took him to the GP to get checked over but then he started being sick so it was off to hospital for a several hour wait in A&E to get checked out. Whilst there I drank two sugary milky coffees. Bad I know but at that moment Whole30 was the last thing on my mind. Thankfully he was totally fine and we got to go home late that night.

As the week went on my chocolate cravings got worse and worse. I’m not sure whether it was the after effect of having the sugary coffees or my fussy eater’s horrific behaviour (hello terrorist three’s, you’ve got nothing on the terrible two’s!) but almost every night I was badly craving a little sugar fix. By Friday I felt completely drained and when a friend suggested a night out in the pub I jumped at the chance. Now of course I could have chosen to have some soft drinks but instead I dived head first into a bottle of wine! I also massively fell off the wagon by eating a big portion of cocoa overnight oats – so alcohol, grains, dairy…I pretty much had everything that is banned!

So what do I do now? According to the Whole30 rules I should now go back and start again on Day 1. Apparently even small amounts of eliminated food are enough to disrupt your body and you won’t feel the full benefits at the end of the 30 days.

But based on this theory I have actually “cheated” dozens of times already. The reality is I have two small kids; one of whom I am trying to wean at the moment.

For me it is completely unrealistic that I could make food for them without tasting it, so yes I’ve had tiny amounts of rice or pasta to check if it is cooked; tested a smidgen of the baby’s porridge and yogurt breakfast to make sure it was ok.

So maybe I won’t reap the full benefits from Whole30 but the fact that it’s shown me that I can get by (most!) of the time without a chocolate fix, and the fact that my family and I are all eating healthier than ever before is good enough for me.

I’m sure purists won’t agree but the fact that my “cheat meal” was a big bowl of overnight oats rather than a slab of chocolate, or a big bag of crisps…that’s progress for me! Oh and if you’re not following Whole30 watch out for my blog post later in the week with the recipe for these oats. They were amazing!

Remember to follow me on Instagram for daily pics of what I’m eating now. (There’s no pics of wine…sorry!)